Summary:
Load Balancing and Failover policies determines how network traffic is distributed between adapters and how to reroute traffic in the event of an adapter failure.

The Load Balancing policy is one of the available Networking Policies, such as: VLAN, Security, Traffic Shaping Policy and so on.

The Failover and Load Balancing policies include three parameters:

Editing these policies for the vSS and vDS are done in two different locations within the Vsphere Client. 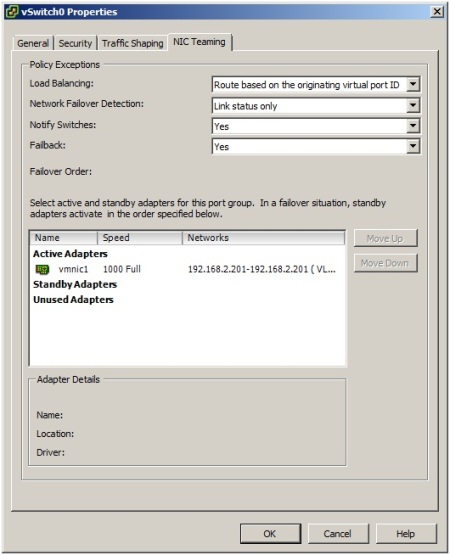 vDS, via Networking. Select the desired vDS.
Configure on the dvPortgroup level. Override on the Port level.
Also on the dvUplink level. 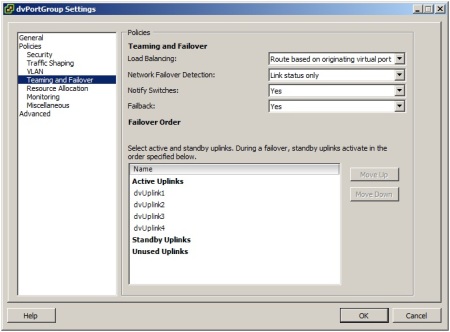 The first Policy is Load Balancing; there are four/five options (vSS and vDS respectively):

When choosing the policy “Route based on IP hash”, it is important that the physical uplinks for the vSS or vDS must be in an ether channel  on the physical switch!

Summary:
The vSphere Networking Guide contains a small section on Networking Best Practices.
I do recommend reading this chapter.

Concerning this objective, the idea is to separate network services from one another, provide bandwith and failover in case of failure.

From last year’s blog post “Configure VMware ESXi 4.1 Networking” comes this example, how to configure explicit failover.
The Management Network uses vmnic0 as a active uplink and vmnic1 as a Standby adapter. The second Portgroup vMotion is configured exactly the other way around.

Summary:
From the VMware Best Practices:

Keep the vMotion connection on a separate network devoted to vMotion. When migration with vMotion occurs, the contents of the guest operating system’s memory is transmitted over the network. You can do this either by using VLANs to segment a single physical network or by using separate physical networks (the latter is preferable).

To physically separate network services and to dedicate a particular set of NICs to a specific network service, create a vSphere standard switch or vSphere distributed switch for each service. If this is not possible, separate network services on a single switch by attaching them to port groups with different VLAN IDs. In either case, confirm with your network administrator that the networks or VLANs you choose are isolated in the rest of your environment and that no routers connect them.

In general, network administrators will tell you the same,

Scott Drummond also collected some best practices in this post.

[1] Ether Channel, see: http://en.wikipedia.org/wiki/EtherChannel EtherChannel is a port link aggregation technology or port-channel architecture used primarily on Cisco switches. It allows grouping of several physical Ethernet links to create one logical Ethernet link for the purpose of providing fault-tolerance and high-speed links between switches, routers and servers. In case you have a stacked switch, you can spread port over > 1 switches.

This entry was posted on Monday, July 9th, 2012 at 17:37 and is filed under Networking, Training. You can follow any responses to this entry through the RSS 2.0 feed. You can leave a response, or trackback from your own site.

This site uses Akismet to reduce spam. Learn how your comment data is processed.